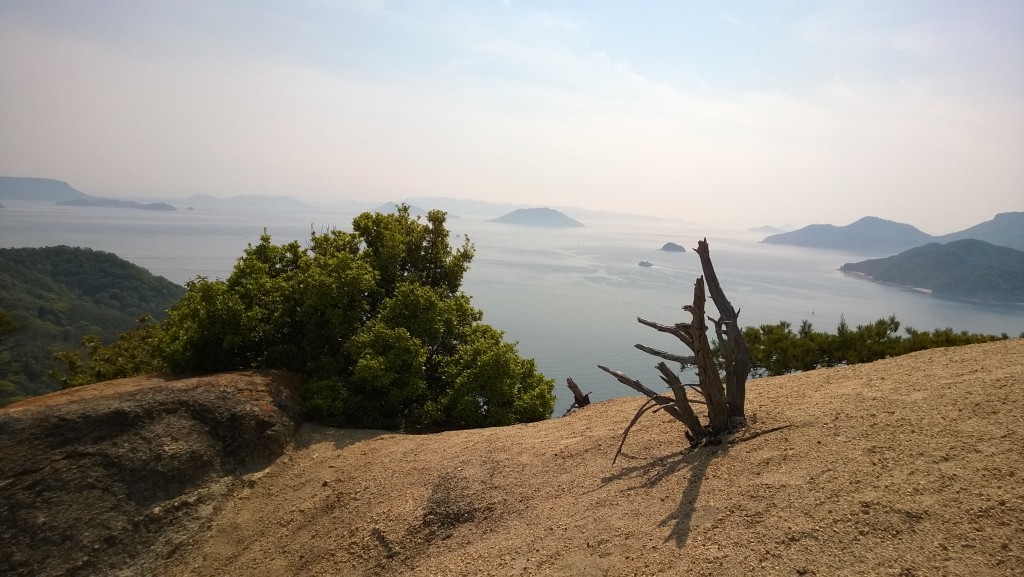 Two weeks ago, I travelled to Shodoshima, literally “the island of small beans”, during 5 days. This island, the second largest of the Seto Inland Sea (between Honshu and Shikoku), is famous for its several soy sauce makers, for being the first area of Japan to successfully grow olives and is home to a smaller version of the 88 Buddhist temples pilgrimage.

05:28 – Start of the trip from Osaka Hirano ward. Despite the early hour, the subway was pretty full of Japanese all asleep or staring at their smartphone, as usual. 08:00 – Start of the ferry from Kobe. As it was the beginning of the Golden Week, it was so crowed I couldn’t get a proper seat and had to stay outside on the upper deck before sitting on the floor, fleeing from the strong wind (I didn’t want to play Marry Poppins!).

11:25 – Arrival at the small port of Sakate, bus ride to my accommodation in Yasuda, and then baggage drop. The ryokan where I stayed for the first two days is an old guest-house for Ohenro, the pilgrims of the 88 temples tour. After a warm welcome from the landlords, a nice old couple with their sweet grand-son, I directly went to a producer of somen, another speciality of Shodoshima. These very thin white wheat noodles are usually served cold during the summer. After eating one bowl of this delicious dish, I visited the factory with a group of Japanese.
Then, I went to a soy sauce producer, Yamaroku. The visit was really interesting; this small company is one of the very few yet producing their soy sauce in wooden casks (it represents only 1% of the Japanese production). Usually, the soy sauce matures for about 1 year. At Yamaroku, they let it ripe for 4 years! Their products are really outstanding; I want to help promoting them!

Afterwards, I took a short walk in the neighbourhood with beautiful views on the mountains and the blossoming rhododendrons. On the evening, after a nice relaxing time in the big common baths with a chatty Japanese guy, I went for dinner. Unfortunately, the dishes weren’t so great, the seasoning too bland.

21:00 – After drinking a very dry Chu-Hai (cocktail of Shôchu and fruit syrup), I fall instantly asleep in my very nice traditional room.

07:00 – Breakfast earlier as planned, having the “head in the ass” (French expression) because of my neighbours (a group of 5 Japanese women). Since 05:30, they were chatting very loud, with their high-pitched voices…

08:30 – Start of the hiking day. I planned to visit the Gorge of Kankakei in the centre of the island. Since I didn’t want to go there by bus, I followed a pilgrimage path near the ryokan, as advised by the landlord.

After one hour on a very steep and wild mountain path, I arrived to Kyôtaki, the 14th temple of the Shodoshima pilgrimage. Carved in the rock, this religious site has a good atmosphere and an impressive statue of Fudomyo, the guardian of fire. The surroundings are lovely, with very nice views on the sea. As I didn’t know which way to go from here, I asked an old monk who was cleaning very thoroughly all the statues. I had to follow the Shodoshima Skyline, a panoramic road. But, after about 25 minutes, I discovered on a road sign that the entrance of the Kankakei site was still 6,4 km away… The monk gave me indications to go to the upper station of the ropeway, not to the lower one… Since I already walked 2 km, I decided to go on this way.

12:45 – Arrival at the upper station of the Kankakei ropeway. As usual, I was the only one walking, all the other tourists came with the ropeway of directly by car. The scenery is awesome, with many good viewing spots. It was worth the long walk! From the upper station, they are two hiking trails available. I decided to take the western one, called “the path of the 12 views”. Under the shadows of majestic maple trees, I followed a steep path down by a river, until the lower station of the ropeway. It was a nice walk but still a small disappointment: the 12 views weren’t so spectacular nor interesting than the panorama above.

14:00 – Since it wasn’t that late, I decided to ride with the ropeway and then go down again on the other, eastern path. Usually I don’t like ropeways, they are mostly not worth spending money. But this one is different! It’s the best way to admire the huge and strange rock formations as well as the several shades of green of this marvellous gorge.

14:15 – Back again at the upper station, I started following the eastern hiking trail (path of the 8 views). It was really steep, much more than the other one, and my tired legs and knees reminded me that I already walked more than 12 km in the mountains… At first, there was nothing to see, only the arduous rocky path. Then, after about 2 km, I arrived at Seki no Mon, the Stone Portal. This natural arch of rocks amidst dense vegetation is the entrance and the name giver to one of the most impressive monuments I’ve seen on Shodoshima.

This temple, number 18 of the pilgrimage, is carved directly in a cliff, with a huge statue of Fudomyo, twice as big as the one in the 14th temple. After going up several steps, I arrived in the heart of the temple, a cave with a very quiet and solemn atmosphere. I stayed at this site, near a beautiful mountain stream, almost 30 minutes, enjoying the quietness and the special ambiance.

16:00 – Journey back to Yasuda by bus. Today I walked 15-17 km. Arrived at the ryokan, I then really enjoyed a well-deserved bath before going to the dinner room.

18:45 – After a better meal than yesterday, I was about to leave the room as two men came for dinner. We started to talk and to drink together. One of them was a funny attorney from Tokyo who used to work at this ryokan during his youth. The other one was a former biologist from Kobe who used to go often to Germany for work. Two other men, both pilgrims, came afterwards.

22:30 – After many interesting conversations and a delightful evening, we all went to bed very tired and a little drunk!

07:30 – Again early breakfast (the chatting neighbours…), followed by a nice last walk in the rural surroundings of Yasuda.

09:00 – Farewell to the staff of the ryokan. It was a very nice place, I felt like at home. If they had a better cook, it would have been perfect!

09:30 – Bus ride to the “Olive Park”, a site dedicated to the production of olives on Shodoshima. I didn’t expect much from this place but in the end it was really interesting, with beautiful seascapes and blossoming flowers surrounded by olive trees.

12:00 – Bus ride to Tonosho, the biggest town of Shodoshima. My second accommodation, located near the port of Tonosho, is like a business hotel and not so good. A normal western room with WC/shower, OK but not my kind of accommodation in Japan. During the Golden Week, most of the hotels and guest houses were full booked and I was glad to find anything at all.

13:30 – With my rental bicycle, I rode to the “Angel Road”. It’s a sandbar connecting three small islands to Shodoshima and the main attraction of Tonosho. During low tide, it is possible to walk along this sandbar. It is said that couples who cross it hand in hand will find happiness together. Despite this really kitsch background, Angel Road is a beautiful place with a gorgeous panorama.

17:30 – Dinner at an Izakaya (recommendation of the hotel staff). The place was nice; the food really delicious but it was pretty expensive (or I ordered too much!).

Day 4 – Mercy in the mountains, rice landscape and peninsula exploration

08:20 – Bus ride to Daikannon, a large white statue of Kannon, the Buddhist goddess of mercy. Completed in 1993, this 50-meter-tall statue is impressive. It’s hollow and houses a temple with hundreds of golden miniature replicas of Great Kannon. On the top of it (accessible with an elevator), a tooth of the historical Buddha, donated by a temple in Sri Lanka, is enshrined, together with a sort of treasure. It looks like a Gringott vault of Harry Potter!

10:00 – Walk on mountain paths towards the terraced rice fields of Nakayama. Called Senmaida (one thousand rice fields), this cultivation method was the only possible in the mountainous regions. Nowadays it’s really seldom. You have to go to the upper part of the fields in order to see the whole beauty of this scenery. It was overwhelming and I felt much respect for the hard working peasants in these difficult fields!

13:00 – Back in Tonosho, I rented again a bicycle and rode to the peninsula south-west of the town. The main attraction was a rock up the mountain named Kasane-Iwa. The way up was really tiresome, with a climbing part with rope, but it was worth the effort: passing a Torii gate in a bare landscape (like in western movies), you come to a big rock posed in an instable state with the wide sea on the horizon. Simply great! On the evening – After making some purchases at the local supermarket, I returned to my hotel and ate a dinner made of “Hangaku-Mono” (half-priced goods, which are available from 19:00 on in Japanese supermarkets).

08:20 – Bus ride to Sakate, the port where my ferry back to Kôbe would start on the afternoon. The weather is changing; a storm is planned to pass through Shodoshima in a few hours. After dropping my backpack at the local tourist information, I started my hiking tour of the surrounding temples from the Shodoshima pilgrimage.

One hour later, I arrived first in a nearly abandoned temple on top of the mountain, where I chatted with a guy from Himeji making a cycling tour in Shodoshima. Then, I visited the temple number 1 nearby. It was not bad, with a big troglodyte part. But the better one was number 2, with a fudomyo statue between the mountain and the sea, as well as a beautiful very dark room with an altar and nice red lanterns. Guests from my first accommodation praised these two temples as the best ones they’ve seen in Shodoshima. But for me, the number 18 in the Kankakei Gorge is and stays the most impressive one!

12:00 – Back near the shore. I visited the musueum of Marukin Shôyu, the biggest soy sauce producer of Shodoshima. It was interesting, but too big, too touristic. For me the real soy sauce maker of this island is Yamaroku!

13:00 – Walking back to Sakata. In the quasi ghost town, I stopped for lunch in the only available place, a small café managed by students of the Kagawa University (in Takamatsu on the island of Shikoku). It’s only opened during the week-end and the public holidays. All the students come by ferry for work, stay 1-2 days and go back to Takamatsu. I ate a very good Hayashi-Somen (cold somen noodle) served with fruits. After a coffee I tried another speciality of the house: Shiso-Juice (Shiso = Japanese basilica). It was a little bit strange but very tasty!

15:45 – Despite of the beginning storm, with strong winds and rain, the ferry set off on time. During the crossing, I ate a bento and drank Chu-Hai while listening to 21 pilots. Thanks to Pat for letting know this great group!

19:30 – Arrival in Kôbe 30 minutes late. Finally the storm wasn’t so strong as espected! 21:30 – Finally at home in Hirano. This Shodoshima trip was very interesting and instructive. I have now all information I need to improve my tours to this unforgettable place!