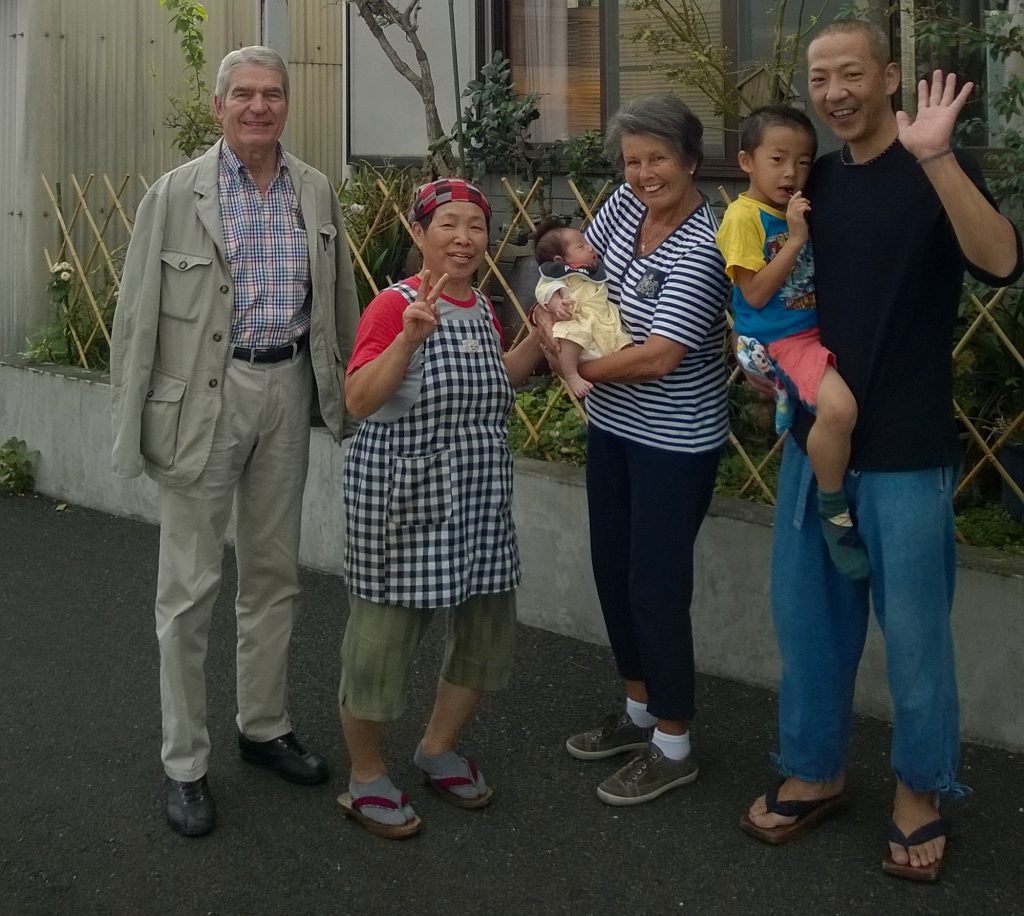 Today was farewell day!
First, we said goodbye to the wonderful people of Minshuku Takayoshi. I really love this place and always feel like at home!
Then, we took a long distance bus to the airport of Kagoshima. After 2 hours under pouring rain, I said goodbye to my customers, who flew back to Osaka. They were really nice and uncomplicated; I enjoyed the tour with them and hope to stay in contact! 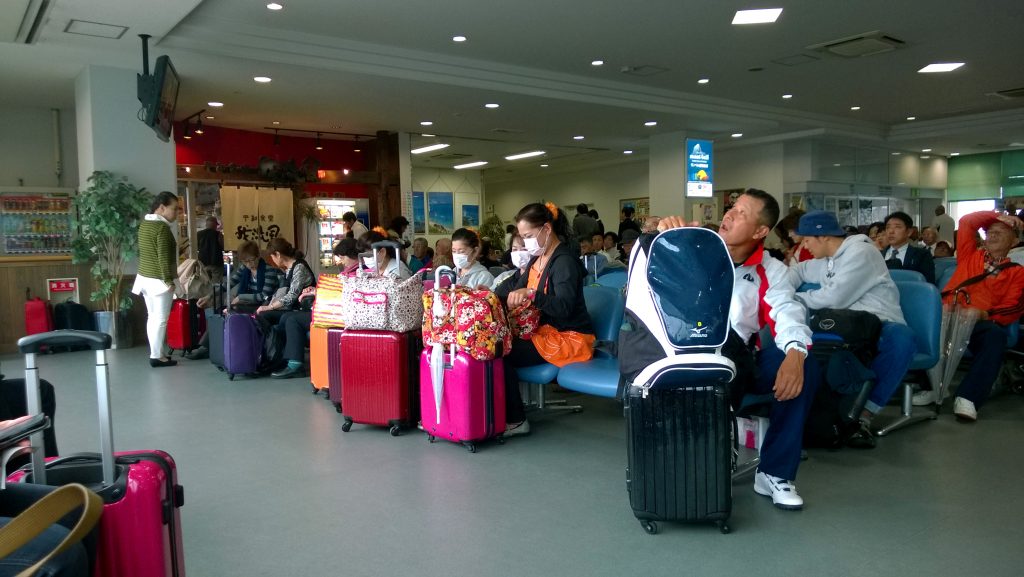 From the airport, I took a bus to the Kagoshima ferry terminal. It was crowded with elderly people, among them many women with too bright coloured clothes and suitcases. It’s almost impossible to look at them without sun glasses! Luckily for me, they weren’t going to Yakushima, but to the island of Tanegashima, famous for its beaches and resort hotels…

13:20 – Departing with the jetfoil boat “rocket”. On the way, the weather cleared up uncovering the southernmost point of Kyushu, Cape Sata, a wild and beautiful place I visited 15 years ago.
15:10 – Arrival at Miyanoura, the main port of Yakushima. Just as a friend of mine said, it feels like disembarking on the island of Jurassic Park: The heat is sticky and just behind the small town of Miyanoura, you’re overwhelmed by numerous high and deep green mountains covering almost the whole horizon! 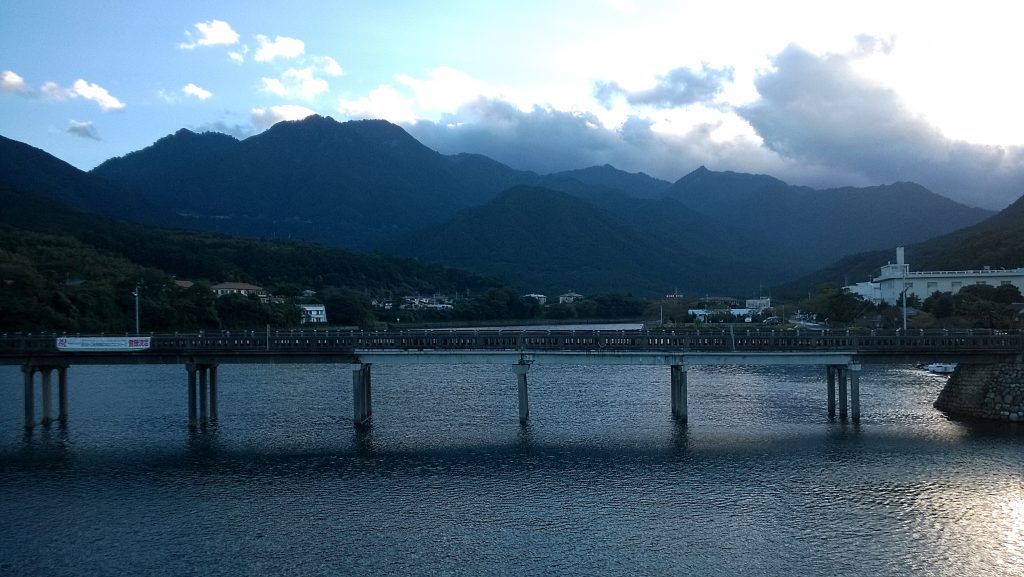 After dropping my baggage in the spacious room of the Minshuku Friend, I went to the nearby and almost only supermarket of Miyanoura, in order to buy groceries and a picnic for the hiking day tomorrow. In Yakushima, you have to be well prepared before starting a tour in the mountains. There is absolutely no civilization out there, except hundreds of apes and deer!

On the evening, good chat with the other guests in the common room of the Minshuku, drinking together beer and shochu. Many of them are so-called “Repeater”, coming again and again to Yakushima for hiking or diving. Then, after 9 PM, we went together to the 3rd floor, in the flat of the Minshuku’s owner where other guests were already partying. After just a few hours, I already love this place!

I woke up way too early, at the crack of dawn (05:45) and took my breakfast with 2 guests who were already on the starting blocks for an 8-10 hours’ tour! My hiking plan for the day wasn’t that ambitious, I just intended to follow the Shiratani Ravine trail (5-6 hours) in the company of another guest, a young woman from Tokyo, Shoko-san. 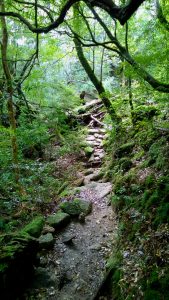 08:10 – Depart from the Minshuku by bus. The bus trip itself was already great, with impressive views on Miyanoura Bay and gorgeous valleys. After 30 min, we arrived at the starting point of the trail.

08:50 – Compared to Miyanoura it’s considerably chiller and I had to change clothes before starting walking. At the beginning, the way wasn’t that steep, but it changed quickly… We hiked through marvelous landscapes, countless shades of green in a jungle of moss and wild rivers.

After about 30 minutes, we decided to leave the main path behind and to follow another trail, longer but more interesting, according to one of the guests of our pension, a mountain guide. This way was more challenging, but it was worth the effort! We dove in a world of swollen crystal clear rivers and huge trees covered with moss. Some of them are so huge and strangely formed that the trail must pass through their trunks! One hour long, we enjoyed almost alone this primal nature wonder. 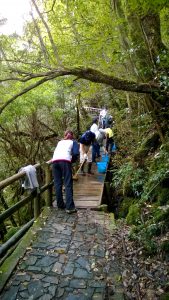 Then, we rejoined the main path, after a very steep and slippery descent. All of a sudden, we weren’t the only human beings anymore! It was almost crowded with 30 hikers, most of them Chinese, with huge backpacks. After passing them, we began the last ascension which was real climbing, partly with ropes! After 15 minutes, we arrived exhausted at our goal. Sitting on a huge rock overlooking a sea of green without any sign of civilization, we enjoyed a well-deserved rest.

The way down was as steep and tiresome as the way up. At a crossroad, we had lunch (food tastes so good after such a physical effort!), watched by an agile ape in the trees above.
On the way back, we stayed on the main path, interesting too but not as beautiful as the mountainous trail! We met several volunteers who were cleaning the path with brooms and water from the river. Japanese are really fanatics of cleanliness!

After 4 hours and 30 minutes, we finally rejoined our starting point, completely worn out, but glad of what we achieved!

In the bus back to Miyanoura, most of the passengers (apart from me) fall asleep. Just after we arrived at the Minshuku, the other 2 hiking guests came back too. The mountain guide suggested then to drive together to the nearest hot spring. Great idea! We relaxed in the baths near a beautiful river, a perfect conclusion for a tiresome but great day! 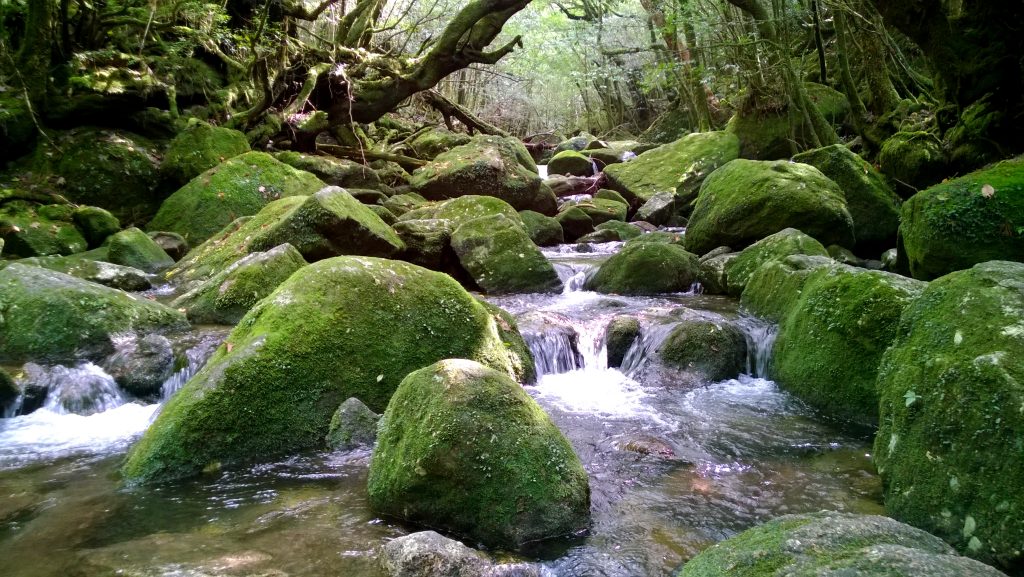 Still tired with a small hangover, I took breakfast, packed my bags and went to my new accommodation (I wanted to test another place for the business). It’s was a huge disappointment. First: The address they gave on the Internet was wrong, it was located on the other side of the bridge, far away from the town center. Second: The room was really run-down with very old tatami mats, the surrounding buildings in the same state and partly dirty. Third: My room was next to the exhaust hood of a nearby restaurant… I never experienced such a bad accommodation in Japan! 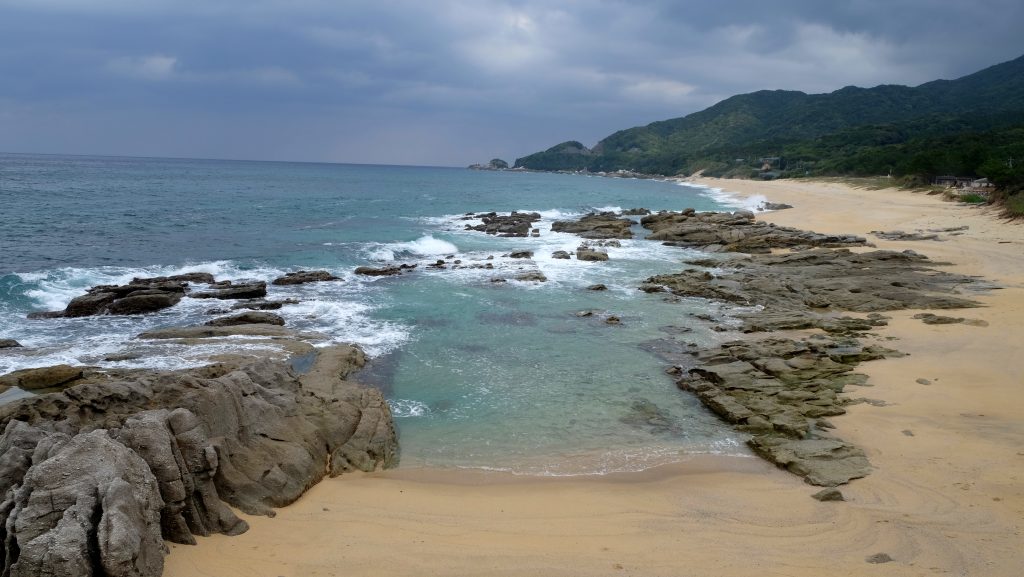 Really unsatisfied with this place, I just dropped my backpack in the room and went away. I took the bus on the western coast of Yakushima, to the beach of Inakahama, place where sea turtles come to lay their eggs. It wasn’t the proper season (they lay the eggs in spring), but the beach was still very beautiful and wild. On the way in and back, I experienced the quick changes of weather in Yakushima: In Miyanoura blue sky, during the bus trip (10 km) it rained but at the beach the weather was nice again. And as I learned from others, on the mountain side, it rained most part of the day…

On the afternoon, I came back to Miyanoura and strolled around in town for a photo shooting session. After an early and good dinner at the accommodation (at least one positive point about this place…), I then went to the Minshuku Friend to meet again with the other guests. As I arrived, Shoko-san (the girl I’ve been hiking with) and others were about to leave, to eat at a restaurant. I just finished my dinner, but went anyway with them. Coincidentally one of the new guests was a German guy, so I could help to ease the communication! At a nice Izakaya (tapas bar), we ate delicious small dishes while drinking beer.

Then, we came back to the Minshuku Friend and went to the 3rd floor where many people were already gathered and drinking shochu. At this pension, it’s party every night! I stayed until 22:30 and then walked back for 20 minutes to my crap accommodation…. 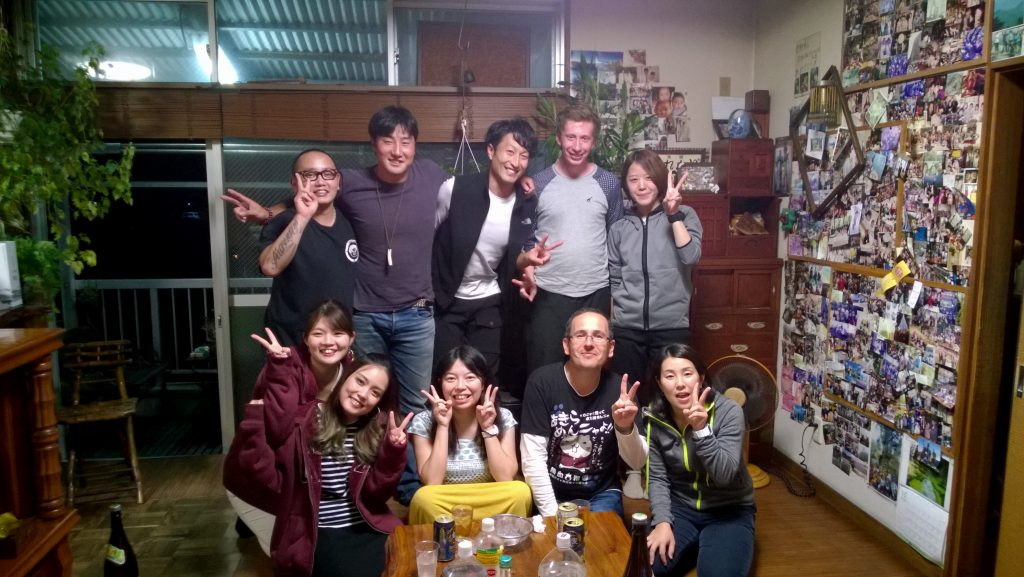 In the morning, I left my crap room behind without any regret and was picked up by a Japanese guy who lives and works in Yakushima and is often partying at the Minshuku Friend. Together with Shoko-san and Eri-san (another interesting “hiking-girl” I met at the pension), we drove to the port. There, I said farewell to these very nice people and took the jetfoil back to Kagoshima. Yakushima was an impressive and unforgettable place, I’ll surely come again soon and be a “repeater” myself!

From Kagoshima, I then drove for 2 hours with a shuttle bus to Shibushi, a port town on the south-east coast of Kyushu. My ferry to Osaka started from there on the evening. Compared to the one I took last year from Beppu with my parents, this ferry was older and not so well organized. My dormitory was huge (86 beds…) but luckily almost empty!

That’s the end of my journey. I hope you enjoyed it! Both the tour with my customers and the trip to Yakushima were great. I can’t wait to come back again to Japan next year! Sayonara! 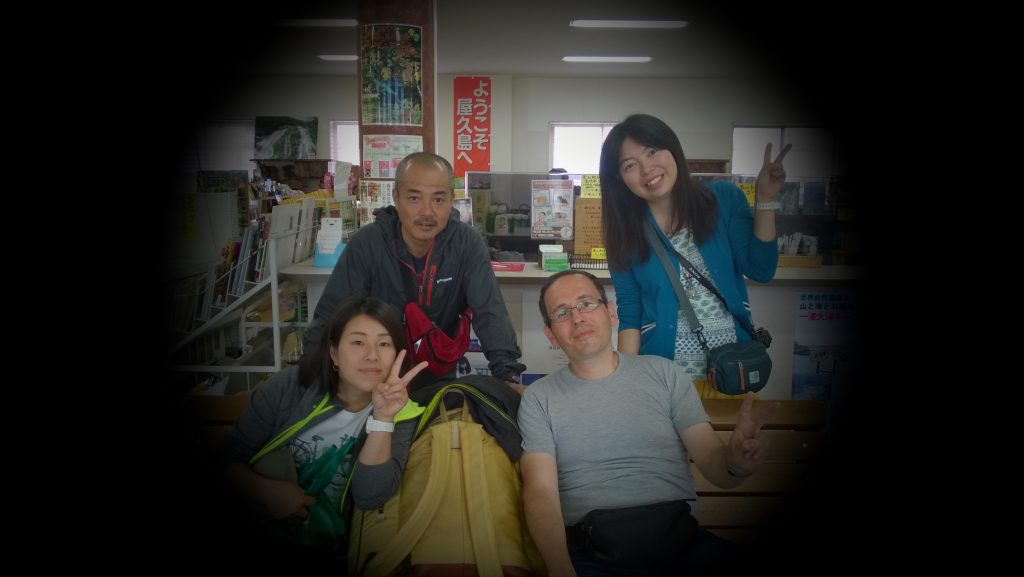