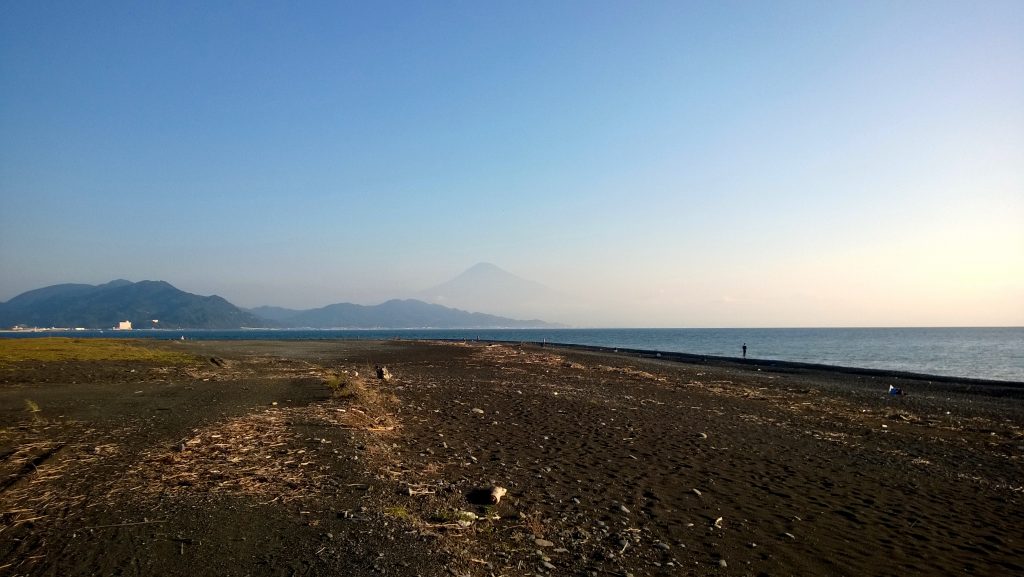 The schedule was as follows: Arrival at our hotel at 2 o’clock in the afternoon and then stroll on the coast admiring the Mount Fuji.
What really happened: 15 minutes after our departure from Matsumoto, the train suddenly stopped in a deserted station and stayed there for 3 hours due to a signal breakdown… Such problems are an absolute rarity in Japan; it was for me the 1st time in 20 years! When we finally arrived at the hotel in Shimizu, it was 17:30 and pitch dark… Apart from us, the hotel was full of Iranian karateka training for the world championship which was being held in the nearby town of Shizuoka.
The hotel itself is a huge disappointment: Built in the 70s there is smell of cold tobacco everywhere, the staff isn’t that welcoming, only the food is good as excepted!
The next day, I woke up very early and went for a walk at the beach of Miho no Matsubara, famous for its view on Mount Fuji. The view was indeed stunning but the Fuji was hiding in the mist…
According to a legend often played in the Noh theatre, an angel descended to this beach and laid her Hagoromo (magical feather-mantle needed to fly back to heaven) on a pine bough before going to swim. A fisherman found it and would only give it back to her if she performed a celestial dance for him. She accepted his offer but disappeared in mist after the dance. Since then, the fishermen are longing for her return on the beach of Miho no Matsubara.
Back to reality: After meeting with another Japanese friend of my customers at the ferry terminal, we crossed the bay of Surugawan toward Toi, on the western coast of the Izu peninsula. This peninsula is extremely popular among Tokyoites, but luckily only the eastern part of it! On our way to Toi, we excepted to have a good view at Mount Fuji but the evasive giant was still in hiding…
From Toi, we took a bus to our destination, Dogashima. This place is famous for its wild and beautiful coastline, part of it which can be visited by boat. Unfortunately, there was no boat cruise on this very day due to heavy waves… Damn! After a quick change of plan, we went for a long walk through a jungle-like vegetation along the coast which is indeed splendid and wild. 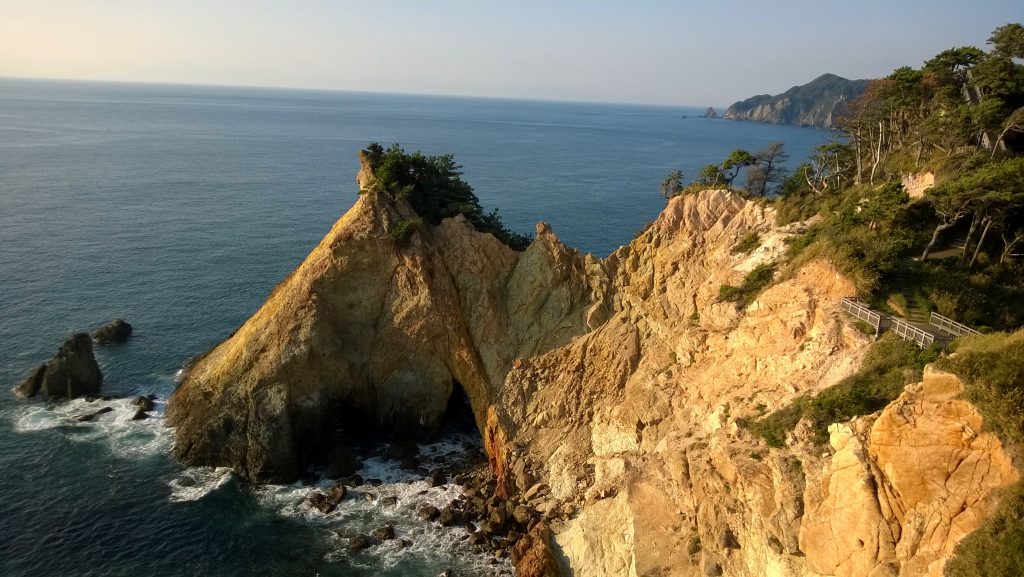 For the return trip to Toi, we then booked a taxi for 1,5 hours in order to explore some other nice parts of the coastline. On the way, we stopped at several beautiful spots. The best one was a cape with a breath-taking scenery of huge rocks and stormy waters.

Before breakfast, last walk on the shore to the pine tree of the Hagoromo legend, but without any sight of the Fuji or the celestial creature…
Then, long train trip with many changes up to our final destination, Hiroshima. In the local line bound for Miyajimaguchi, the train suddenly stopped in a small station, we heard from every smartphone around a strident ringing with the message “Jishin, Jishin” (= earthquake in Japanese). 30 s later began the tremor… We were pretty shaken, the train moving up and down like a rambling toy. All in all, it lasted for maybe 30-40 s. The epicentre of this strong earthquake (6,6 on the Richter scale) was in the Tottori prefecture, about 100 km north from Hiroshima. It wasn’t my first quake, but surely the most impressive one! In my hotel room, on the 8th floor of a tall building, I then felt one strong aftershock about 1 hour after the first quake. 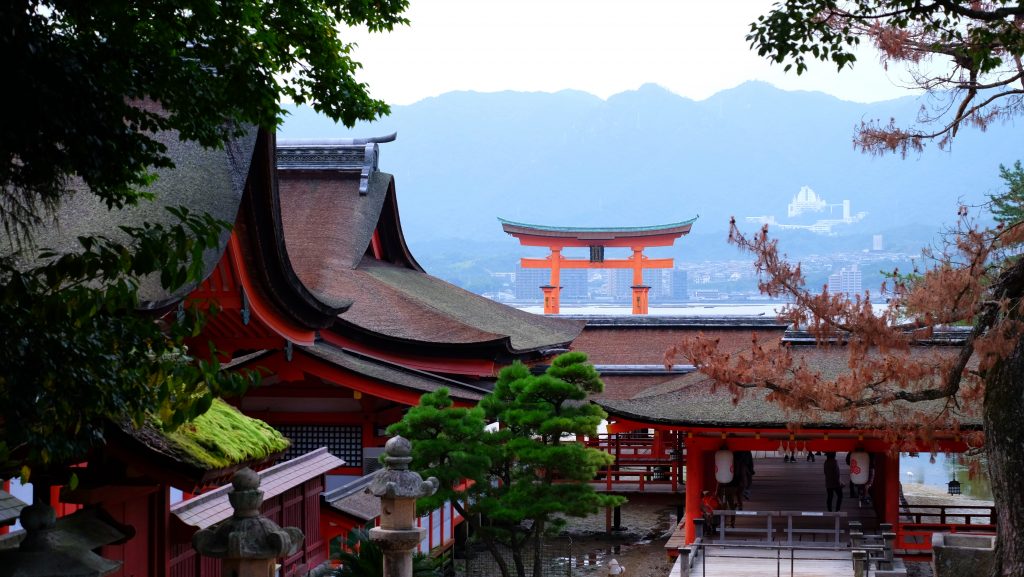 After a short break to recover from this event, we then took the ferry to the nearby island of Myajima, who boasts the most famous Torii gate Japans’. This place is so touristic, it’s unbelievable! We had to fight our way through a human tide past several kitsch souvenir shops before arriving to the real site of this holy place of Shinto. But it was worth it, the swimming Torii and its surroundings are impressive! The centre of this island is sacred and it’s therefore forbidden to cut the trees or hunt the numerous wild animals (deer and monkeys). We strolled around, visiting a few nice temples. As it was getting dark, we then returned to the peer, admiring on the way back the beautiful scenery of the illuminated Torii.

After an agitated rainy night and one more aftershock, we took the train to Hiroshima. Due to the bad weather, we went first to the Peace Memorial Museum. Even if I’ve been traveling through Japan for the past 20 years, it was my first visit of this obligatory stage of a “standard trip to Japan” for most foreigners. Honestly, it was a big disappointment. This place is much too crowded and bad organized: There is so much to read that everyone is staying a long time at each exhibit and it feels like queuing for the Space Mountain in Disneyland all the way! It would be much better to only allow small groups to get in, for example each 15 minutes, and let the other people wait outside. Despite all of this, you could get a sense of the horror of the Atomic Bomb and its impact on the town and the survivors. This place really deserves a better organization! 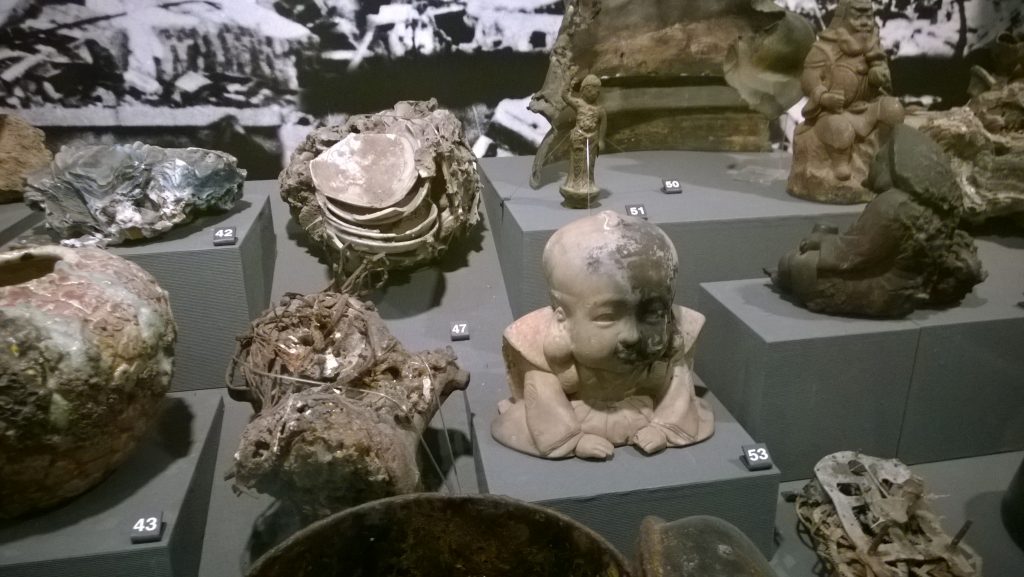 Next to the visit, we walked through the Peace Park under drizzle past to the Atomic Dome (sadly not so photogenic in the rain…) and went for lunch in a small and good diner-like restaurant. Thereafter, we took a taxi to the Castle Park and walked up to Hiroshima Castle. It’s much smaller than the one in Matsumoto, but has its own charm and was faithfully rebuilt after the war. As the weather wasn’t getting better, we returned to the hotel early and rested. On the evening, excellent dinner at the hotel’s restaurant with the best Macha-cake (green tea cake) of my life! 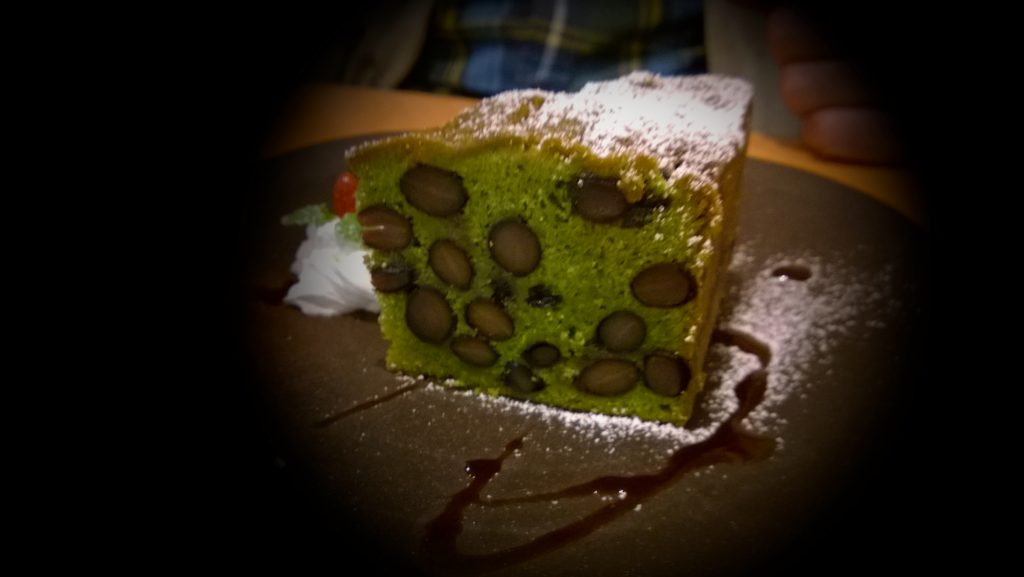 Today, we left behind Honshu, the biggest island of the Japanese archipelago, and began our exploration of the Nine Provinces (signification of Kyushu). After another long train travel we arrived at Usuki, a small city famous for its stone Buddhas and its old samurai district. Although our accommodation is only 5-10 minutes on foot from the railway station, the owner of our accommodation picked us up by car and after a small break at his splendid Ryokan brought us to the site of the stone Buddhas, 5 km from the city centre. Japanese customer service is surely one of the best in the world! After a delicious lunch, we walked around the impressive Buddha statues carved directly in the volcanic rocks around the late Heian period (794-1185). Situated in a bamboo valley full of cosmos flowers, this peaceful place is an invitation to meditation. 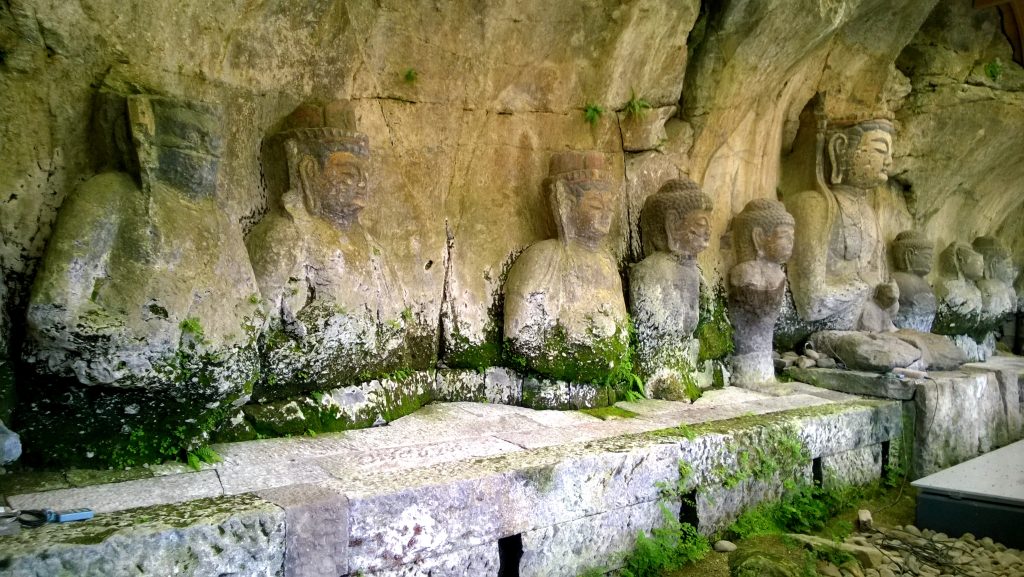 Back in Usuki, we went for a walk through the alleys of the samurai district. Compared to the crowded Hiroshima, Usuki is a ghost town. Being the only tourists around, we fully enjoyed the nice and quiet atmosphere of this former castle town. At the Ryokan, after a nice warm bath and a rest in our spacious and well-arranged rooms, one of the best dinner of the all trip was waiting for us. Served in delicate pottery fabricated by the sister of the owner, all the dishes were excellent and sophisticated, for example horned turban in garlic butter. Bravo to the cook! 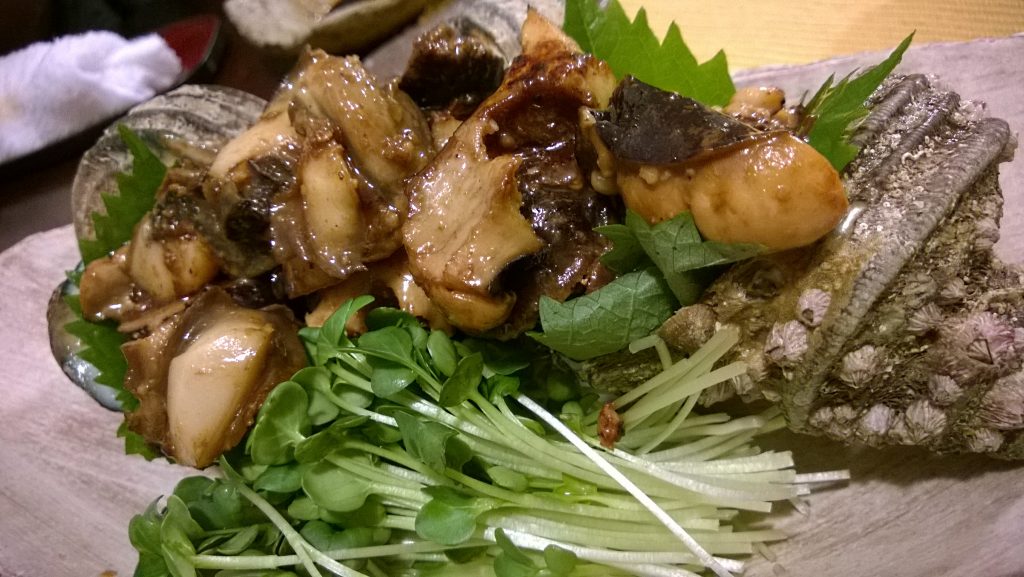 After the best night since our departure, in futons of excellent quality, succulent breakfast with memorable scramble eggs. Then, we went for a walk in another part of the old town, charming as ever, with many fine kimono and accessories shops. Around midday, we said farewell to Usuki and travelled about 2 hours to Aoshima, our destination of the day.
This small seaside resort is popular among surfers in all Kyushu. But our interest lay in another site, the tiny island of Aoshima (= green island) ringed by white beaches surrounding a subtropical jungle at its centre. The shallow water around the island has a geological phenomenon known as Oni no Sentakuita, or devil’s washboard. Visible at low tide, these perfectly straight rows of basalt rock look as if they must be the remnants of something manmade. As with my parents one year ago, we toured the island, visiting on the way the peaceful shrine on its centre. 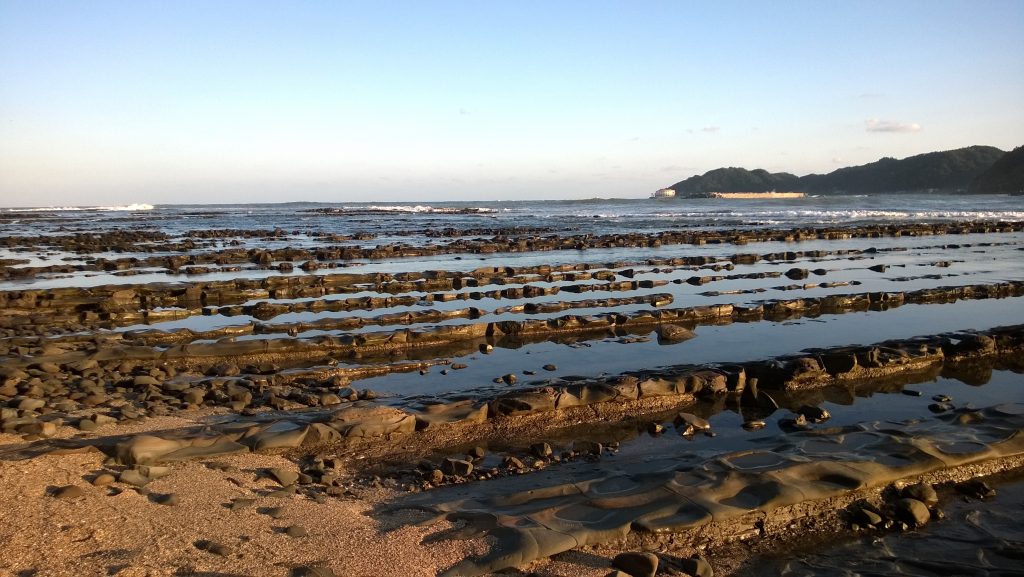 This ends the second part of the diary. After my return to Germany on Tuesday, I’ll then work on the 3rd and last part. See you soon!