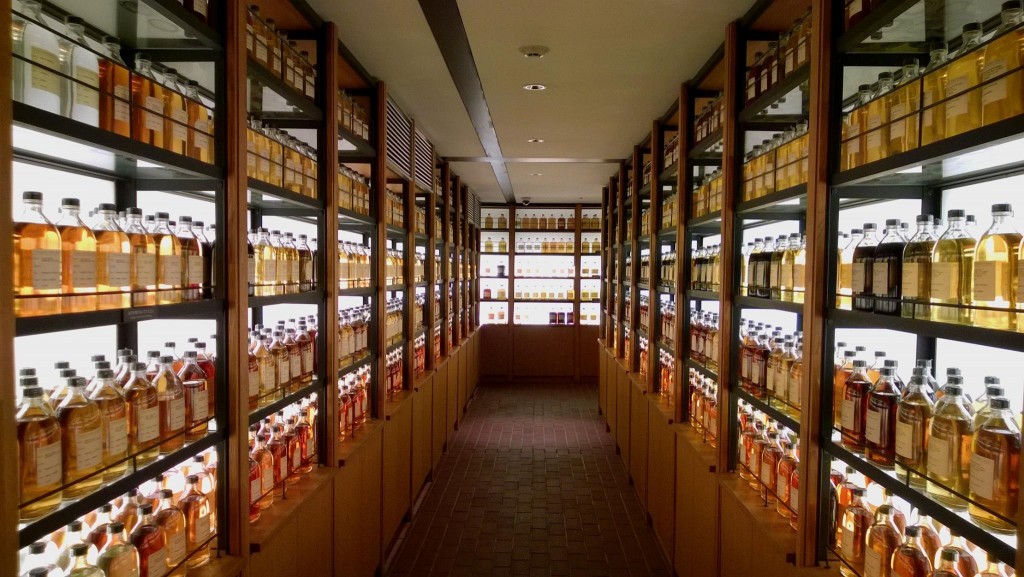 I came back to Germany on Monday, unpacked a few things, cleaned the flat and already packed for the next trip: a wedding in Zurich and then a business trip to France for 10 days! All the pictures of Japan are online, it’s now time to narrate the last events of the Kansai Spring Tour 2016.

The next day after our return from Ise, we decided to take another day trip on the Kintetsu Lines (one of the biggest private railway company in Kansai). We wanted on the one hand to enjoy the good weather and on the other hand to take profit of the last 2 days of our Kintetsu Rail Pass (5 days unlimited use of all Kintetsu trains).

Our destination today is Iga Ueno, an area famous for ninjas. In the western countries, ninjas are usually considered as the Japanese counterpart of the Assassins in the Middle East. Like most of the stereotypes, it’s inaccurate. The ninjas or shinobi were mostly cover agents and spies whose principal activity was to steal documents, not to murder people. The old province of Iga was home to one of Japan’s two leading schools of ninjutsu (art of stealth).

It took us about two hours from Osaka to come to the Iga area. We enjoyed the ride, particularly the section with the Iga Railway, an old local railway company, with very nice decorated wagons, some with characters designed by Matsumoto Reiji (famous mangaka mainly known in Europe for Harlock/Albator and recently for its work with Daft Punk). The whole region around Uneoshi (main town) is very rural with beautiful landscapes of flooded rice paddies and everywhere hidden ninja characters near the railway tracks!

After our arrival, we first went to the old grounds of the Iga castle, just a few minutes’ walk from the station. The castle is situated in a beautiful park with many museums and monuments dedicated to the ninjas and the other famous son of the town, Basho Matsuo. Basho is one of Japan’s greatest poets, the master of Haiku. He travelled everywhere in all Japan and that’s why he’s also called the Wandering Poet.

After strolling in the park, meeting many children and a few parents disguised as ninjas (you can rent or buy a whole ninja costume), we visited the Iga Ninja Museum. This museum seemed small but in the end it was really interesting and worth the visit, with an impressive demonstration in an old house designed for using all possible ninja skills with fall traps, hidden closets, etc.

In order to perfect their art, the people of Iga developed various skills in many different fields,. Ninjas were for example masters of herbalism (to heal wounds or create sedatives/poisons), astronomy (to have a perfect orientation at all time), chemistry (to create the most effective explosives or smoke bombs), nutrition/cuisine (ninjas created among other things new drying methods to preserve food longer), psychology/philosophy (to understand their enemies and how to deceive them).

This visit was a real revelation for me! Now I think differently about the ninjas and their art. Once again, I learned how bad are prejudices and stereotypes!

On our way back to the centre of town, we walked around in old shopping streets and bought Kata-Yaki (very hard but tasty cookies, one of the ninja inventions). Sadly we hadn’t enough time to fully explore this really interesting city. I’ll come again soon!

05.12 – Suntory or the dream of Japanese whisky

Situated at the foot of the Tennôzan mountain range, between Osaka and Kyoto, the Yamazaki distillery is Japan’s oldest malt whisky distillery. Built in 1923 by Shinjiro Torii, the founder of Suntory, one of the oldest and biggest beverage company in Japan, it’s known worldwide as the production centre of Japan’s first Single Malt whisky (in 1984), “The Yamazaki”.

During many years, the western countries made fun of Japanese whisky and considered it of minor value. In the last 30 years, this image changed radically, thanks to Suntory and “The Yamazaki”. Nowadays, Japanese whiskies are renowned and appreciated by whiskies connoisseurs and won many prestigious prices worldwide!

Today, we visited the Yamazaki distillery and participated to a guided tour. The founder of Suntory chose this place for its distillery because of the high quality and purity of the water. Before the beginning of the tour, we visited a few beautiful temples on the mountain side. This whole area is really nice and wild, much more than we expected!

Then, during 80 minutes, we dived into the world of Japanese whisky. It was very instructive, an experience for all the senses, with so many different smells and impressions. After learning about the basics of the whisky making process and the particularities of Japanese whiskies, we took part to a tasting session with the other participants. Not only did we tried 3 different delicious whiskies, but we also learned about the tasting method of the master blenders.

Even if you can’t take part to the guided tour (it’s always full booked, be sure to make a reservation as quick as possible!), the entrance building of the distillery is interesting too, especially the huge “Whisky Library” with bottles from all over the world. I know people who could spend many days “reading” in this marvellous place!

On the afternoon, I did then alone a two hours hiking tour in the mountains around, before going back to Osaka. There were no spectacular panorama views, but it was a very enjoyable walk among the dense vegetation of Tennôzan, with as usual so many shades of green and blossoming flowers.

So, dear readers, that was the last post of my 2016 spring stay. The diary will now rest, until October at the latest. Then, it will come back to life, just in time for my autumn journey to the Japanese Alps and to Kyushu with a group of customers. See you soon!