The Fukuchan Diaries – A Letter to Momo 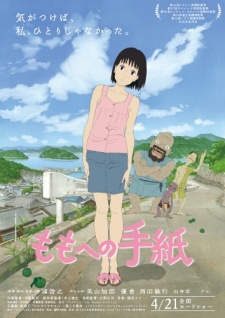 A few days ago, we’ve seen this very nice anime, the moving story of Momo, a little girl whose father just died and who moves with her mother from Tokyo to a small island of the Seto Inland Sea (between Honshu and Shikoku).

At first, Momo don’t like the life in this very rural and foreign environnement. She’s alone all day and has the impression that her mother isn’t missing her father at all. Besides, strange things are happening: three yokai (monsters from the Japanese folk tales) appears in her house. They are a sort of guardian angels whose job is helping her to overcome the loss of her father. In fact, they are clumsy, gluttonous and lazy and only want to enjoy the life an earth….

It was a very funny anime who despicts wonderfuly the traditional Japanese way of life in the country. It’s perfect both for children and adults. We had a really good time!

So, that was the last post before the departure!