The Fukuchan Diaries – 秋の旅 (journey of the fall) part I 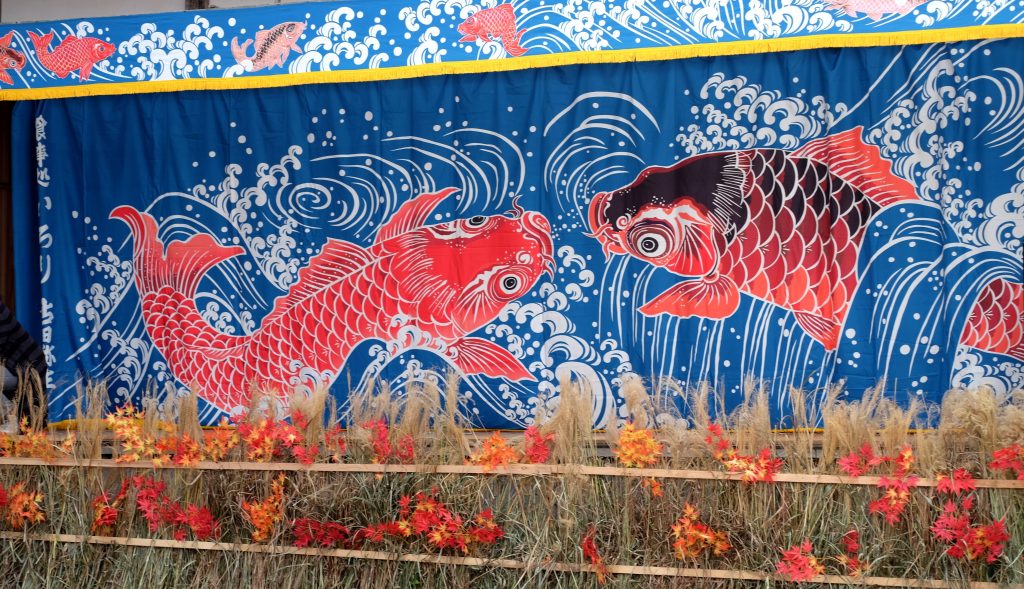 5 weeks long and already almost over… I’m returning next week to Germany after a real interesting stay. During the 16 days’ trip with 2 great customers, we travelled across half of Japan, from a wasabi farm in the Alps to the sweet potatoes fields of South Kyushu. We’ve seen so many beautiful places, met so many nice people, under a great weather. Then, I fall in love with an island, the unforgettable Yakushima! Here the summarized story of the first week.

The first stage of our journey is a place of art and history, home of several types of handicraft. Situated on the Japanese Sea coast, Kanazawa boasts many historical attractions and offers succulent fish dishes as well. My last visit was long time ago (more than 15 years…) and the town changed a lot, becoming much more touristic, with tons of foreign guests, partly due to the new Shinkansen (bullet train) route from Tokyo.
Apart from the Kenrokuen Garden, which was beautiful but not so impressive as the Suizenji in Kumamoto, my highlights of these 2 days were the evening light-up of the castle park and the samurai district of Nagamachi with its numerous handicraft shops. My customers were delighted, especially the woman who is fond of beautiful objects much to the discontent of her husband and his wallet!
Thanks to the perfect situation of our accommodation, 5 min. on foot from the great Omicho fish market, we could stroll around on foot, feeling the tradition in every alley of this great town. On top of that, our Ryokan (Japanese hotel) was really great, apart from the foreign guests (mostly French) who didn’t even bother to answer our greetings… 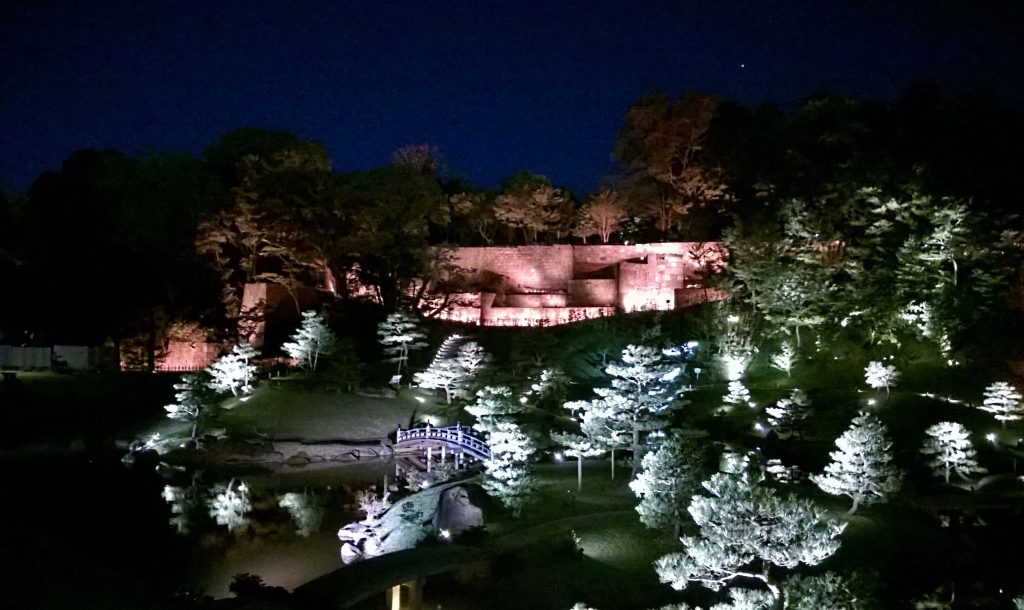 Leaving the handicraft metropolis of the Japanese Sea behind, we travelled to one of Japans’ National Treasure, the valley of Shirakawago, home of the few remaining thatched roof houses. The special very steep form of the roofs is necessary due the heavy snow falls in the region. 15 years ago, I stayed for a night in a one of these houses, a youth hostel, in the village of Gokayama. At this time, I was one of the few foreigners to visit the region. Now, there are full buses of them!
First, we strolled around in Ogimachi, the main touristic site, with several beautiful thatched roof houses. It’s well done and you don’t feel like walking through an open-air museum. Moreover, we came accidentally on the very day of the main festival in the region, the Doburoku Matsuri! During this Shinto harvest festival, the people of the villages produce a special brew of unrefined sake, which is offered to the gods. But there is plenty left over of the porridge looking beverage and everyone can receive some of it in a special cup in the main Shinto shrine. The place was crowed, with about 5000 to 6000 visitors, all sitting patiently and waiting for the Doburoku sake! As my customers didn’t want to try, I drank for 3 people! 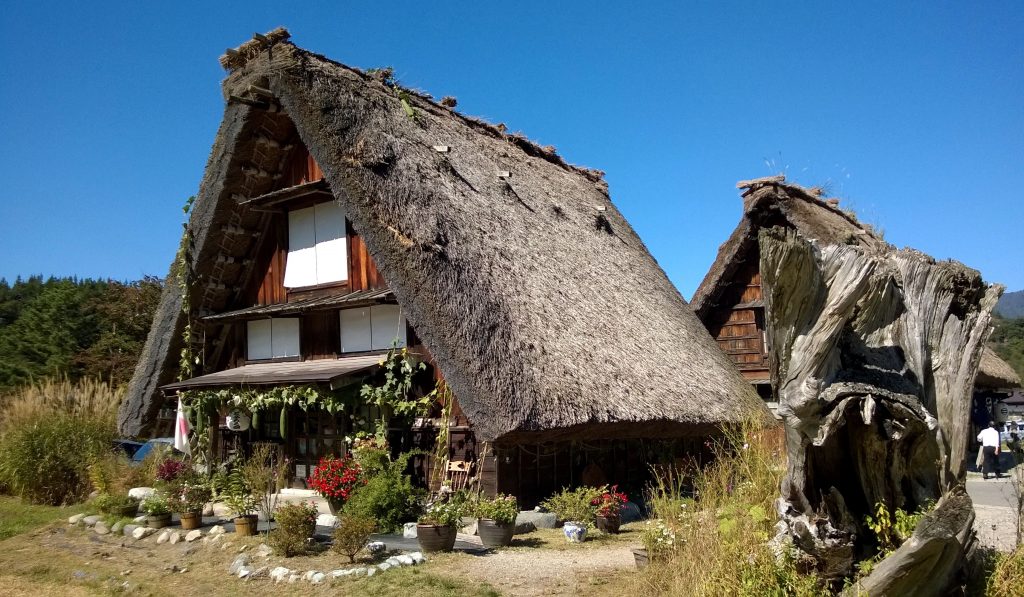 After one of the best dinner of my life, with only local products, and a good night sleep in our 200 years old accommodation, we took a bus to our next destination, Takayama. Due to its beautifully preserved old town and its small alleys, it’s one of the towns called “little Kyoto”. There we met with an old Japanese friend of my customers, who came especially to Takayama for the occasion. After a banquet-like lunch, we visited together the old town. My highlights: Jinya (former local government office with its own garden and beautiful interior decoration), Kokubunji, the oldest temple of Takayama with a 1200 years old gingko tree and finally the exhibition hall of floats from the Takayama festival. 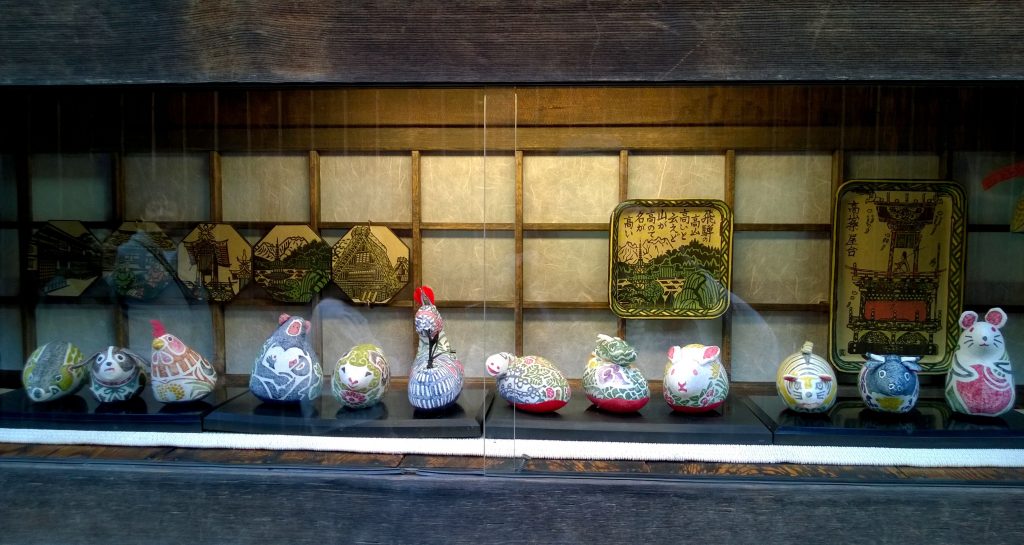 Second largest city in Nagano prefecture, Matsumoto is most famous for its castle, one of the few intact Japanese castles (most of the other ones have been rebuilt many times). It’s also a good “camp base” for trips into the Japanese alps. After strolling around in nice old shopping streets, we visited Matsumoto Castle and its garden. Honestly, it’s the most beautiful Japanese castle I’ve ever seen. Everything is perfect: the building, its location in the park, the surrounding view on the many peeks of the Japanese Alps. On the evening, we went to our accommodation, a great old Ryokan with well-arranged rooms, tons of small decorations everywhere and once again succulent food served by a pretty young woman in kimono! 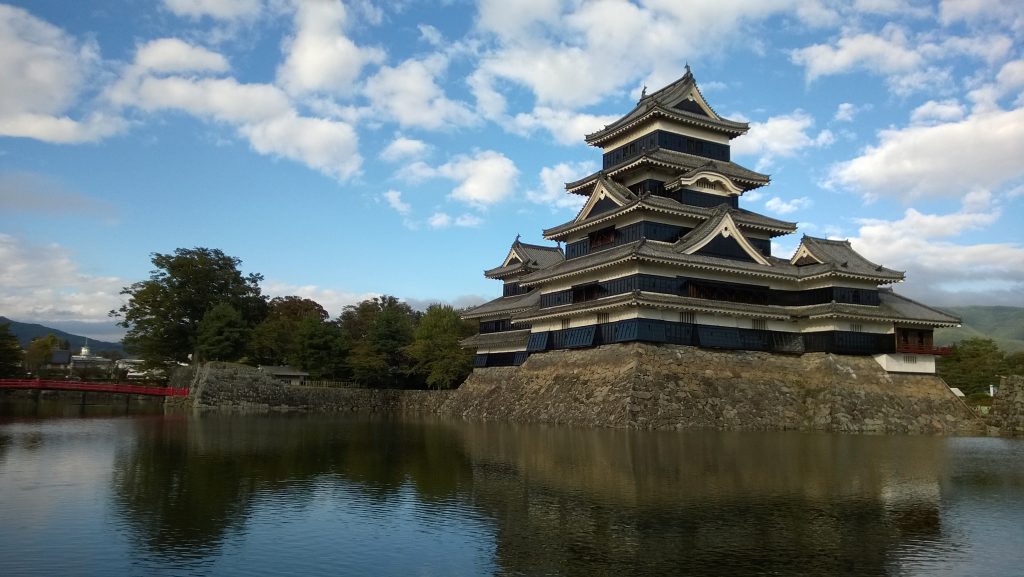 The next day, trip to Hotaka in the Azumino area, home of one of Japan’s largest wasabi farm. On our way by feet to the farm (2,5 km), we could admire the spending view of the Alps and a few of the 600 Dosojin, small cute statues of Shinto deities of borders, which are believed to protect travellers and villages from evil spirits.
Then, we visited the wasabi farm, a huge area with a nice river with water wheels built for “Dreams”, one of the last films of Akira Kurosawa, splendid shades of green and of course thousand wasabi plants in cool water. It’s only possible to cultivate wasabi under certain conditions (air temperature without too many variations and below 21°C, a slow and cool water stream, etc.) and until now everything is done by hand! That’s why real wasabi is so expensive. The site is beautiful and my customers are delighted! 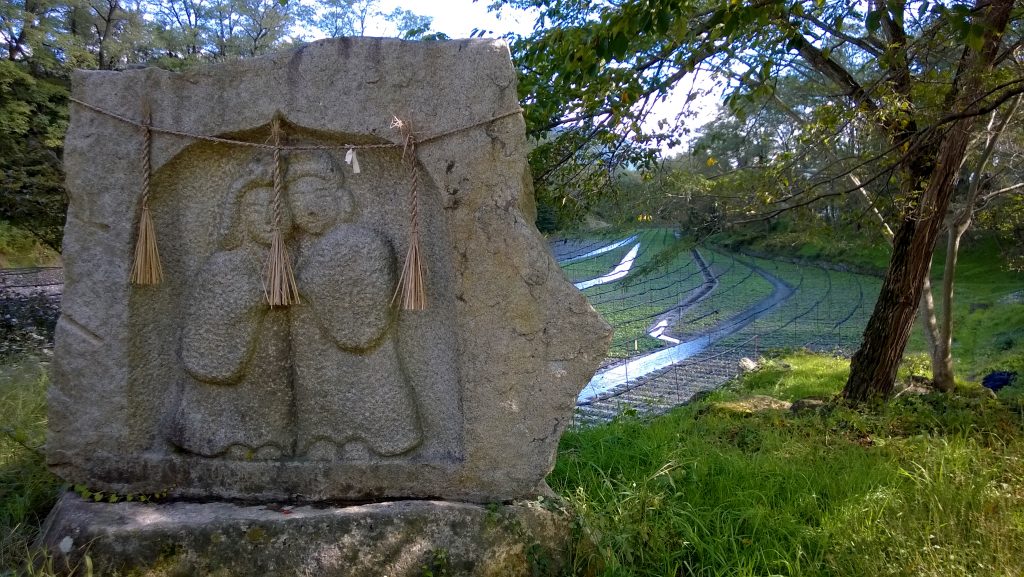 That’s all for now. Stay tuned for the second part of the trip soon!